Post #1 – wow! I’ve been looking forward to this for months as we’ve planned for the Angry Man BBQ site. I’m gong to begin with some basic cooks then begin tossing in some more complex dishes as we go.

One of the first things most folks want to cook when they get a new smoker is pulled pork – and that’s probably one of the easiest Q dishes to prepare. From my perspective there’s one cut that’s king for flavorful, tender and easy to prepare pulled pork: the Boston Butt. It’s not a butt at all actually; it comes from the front shoulder of the piggy. I’m normally looking for an 8-9 pound bone-in Boston Butt at the market. However, the boneless option is also a great cook – that’s all they had when I bought for this post so that’s what is pictured. Let’s get cooking! 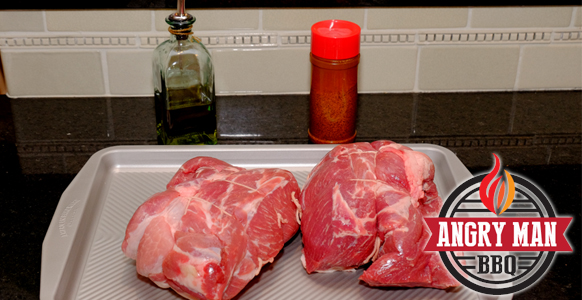 I like to gather all my supplies before I launch into a cook – it’s a habit that relieves a lot of frustration down the line (an anti-angry move).   Pulled Pork doesn’t require much: 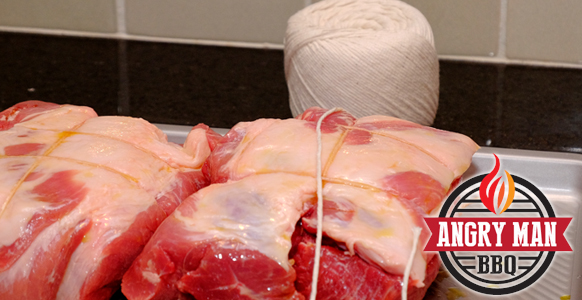 The butcher usually ties boneless butts back together after removing the bone. As I looked at the 2 butts I had for this cook I decided that they could use a little more trussing to pull in a few loose parts. So I grabbed by nearby kitchen twine and added a couple of wraps and knots. With pulled pork as our ultimate goal there’s not a lot of concern about pretty shape – if we were slicing we might be concerned there.

I like to give the butts a rubdown with some great olive oil before I add any spice. It begins a good base flavor for the bark and gives appropriate moisture to allow rub to stick and begin soaking into the meat. My rub always ready in a shaker bottle. I like to recycle and reuse whenever possible so I’m always saving large shaker bottles for my spice mixes.   Move the meat with one hand and shake with the other – that gives you a messy hand on the meat and a clean hand for the spice bottle.   This may not be a “more-is-better” moment – it is possible to over spice here! I like a good covering of spice but I have my limits. Salt is a primary ingredient in most rubs and it’s easy to over salt smaller pieces of meat. A good coating will suffice just be certain to coat all the sides. 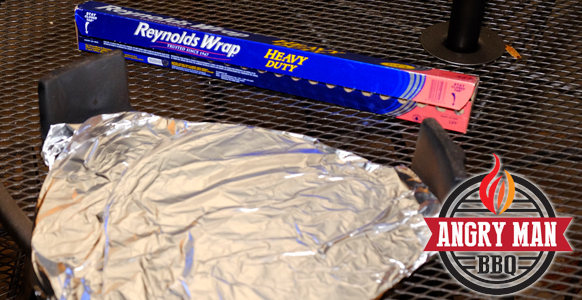 Today I’m cooking on the Large Big Green Egg. The BGEs are great cooker and I truly enjoy them for cooks of this size and duration. For an indirect heat cook (the meat doesn’t see fire!) on the BGE it’s necessary to use a “conveggtor” or as those who have been egging for a while know them, a plate setter. Covering the plate setter with heavy foil helps keep it clean when meat juices drip onto it.   It’s clay and can absorb liquids and hold bad flavors & odors – foil is an easy way to keep a clean cooker and avoid and unnecessary odors and taste. 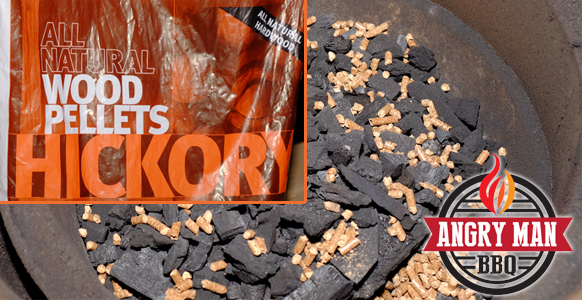 The natural lump charcoal used in the BGE crates great heat and mild smoke.   I’ve found great success in stirring in wood pellets to create more smoke. In deep South Georgia where I was raised hickory is the wood of choice for BBQ – it remains my standard. 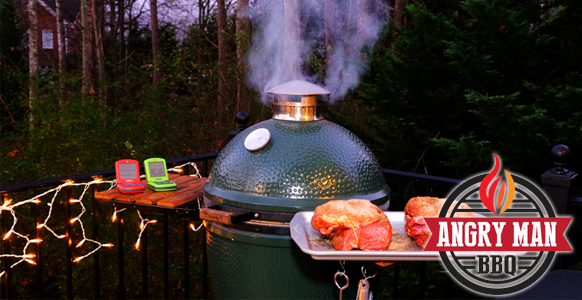 Early morning – the BGE has been lit and allowed to stabilize at 250-275 degrees with the plate setter in place. As you can see I use 2 Thermoworks Chef Alarm when I’m smoking. They are amazingly reliable and simple to use. I make it easy for me with a red one for meat and the green is the grate temperature. No, they aren’t wireless and don’t have the weather forecast built-in but they are amazingly accurate and simple to use. I don’t do a lot of peaking once I put butt’s in the cooker – so let’s load them up and let them enjoy the smoky heat. 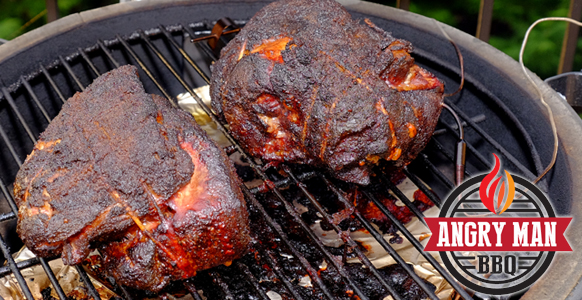 Too often on FaceBook and other postings, folks want to know how long to cook something – the accurate answer is only one: until it’s done. The internal temperature not time determines “done”.   The target for pulled pork for me is 205 degrees. These boneless butts ran just over 8 hours cooking at 275 degrees. 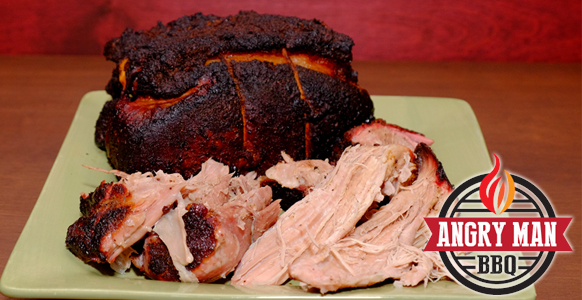 It’s called pulled pork because that’s exactly what one does with it. If you use a knife you’ve spoiled it. I like to take my tongs and poke it open then pull it apart. Pull it apart, slip out any remaining fat and serve it up.   It should be tender and juicy – but it’s fine to add a little sauce if that’s your liking.

Take it easy, enjoy the cooking and you’ll have a fabulous BBQ meal. And you won’t even have to get angry!