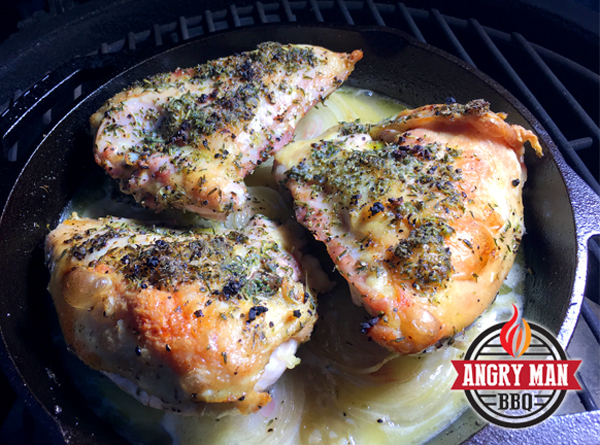 Skillet Roasted Lemon Chicken ready to come off the BGE. A great quick cook in a cast iron skillet for chicken parts or a whole split bird.

Perhaps it’s a part of being birthed and growing up in deep South Georgia – I do love cooking in heavy, cast iron pans.  While many think only of cast iron frying pans on the stove-top for yumalicious fried chicken, they are amazingly versatile tools. Truly, they are champions in the oven!   I can’t imagine trying to make cornbread without a skillet or cast iron corn stick pan (yes, the sticks patterned after ears of corn).

In the world of smokers and kamado cookers the use of cast iron is popular as well. For years I’ve seen way too many pics of beautiful cast iron skillets with the handle cut off to facilitate fitting in a round cooker.   Personally, I just couldn’t get into that act and violate a perfectly good pan by cutting off the handle. Lodge Cast Iron to the rescue! They now have a great line of skillet style pans with two small loop handles. It’s a bit dangerous that one of the four Lodge factory stores is nearby. I have to limit my access but do enjoy stopping in occasionally. They are also a BGE dealer so I can always justify stopping for a bag lump whenever I really want to visit with the pans. 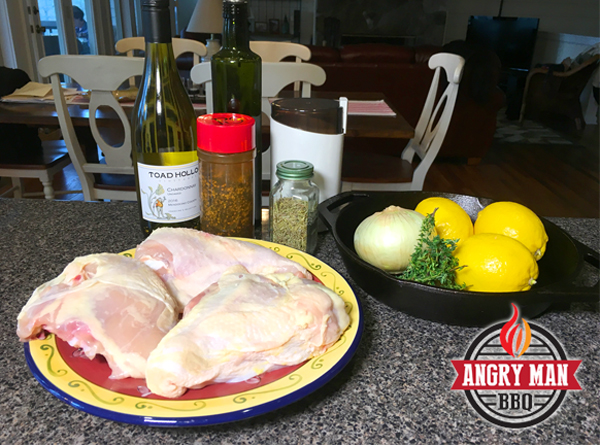 A simple list of ingredients for a wonderfully tasty skillet cook on the kamado style cooker.

I know that there are far more expensive pans than Lodge. There are some things in life that I just don’t let myself do – it’s a bit of the “ignorance is bliss” way of life for me. If I’ve never experienced a remarkably life-changing moment from cooking on a $200 Smithey cast iron pan over the $20 Lodge then I can be contented with what I have. Besides, I really don’t need another expensive passion/hobby (or as The Pleasant Lady describes them: obsessions).   Anyway – the Lodge pans are great and I enjoy using them. I do suggest spending a little time seasoning them before use – even though they are “pre-seasoned”. I’ve become a fan of “Crisbee” which is a combination of Crisco and beeswax in what appears to be a deodorant stick. Put a new pan through a few rubdowns and bakes with Crisbee or oil before using it to be absolutely certain you have a super cooking finish.

Now, about the chicken…..  As you should already know about me, a recipe is really a suggestion! The suggestion for Skillet Roasted Lemon Chicken came from The Barefoot Contessa aka Ina Garten. Like Ina I’ve sort of fallen into this cooking thing and it seems to be a force of it’s own. Check her story on her site – you’ll be surprised. Anyway, somehow I bumped into this recipe and had been holding it in my “ought to cook” folder for a few months. Recently we had an evening for trying something new and this one surfaced – it’s a definite keeper and will reappear soon.

Chicken! Buying it has really become a challenge over the past few years. I recently had a significant birthday, so I’m really admitting age when I talk about remembering my mother sending me into the store to buy whole chickens with instruction to get them just under 2 pounds each. These days it seems that just a chicken breast is just under 2 pounds. I tried 2 different grocery stores and the smallest fryers were over 5 ½ pounds each – yikes!!! It wasn’t exactly what we wanted but we settled on a package of 3 breasts that all belonged to chickens named Dolly. I would have much preferred a whole bird but my 10.5 inch pan would not hold what was available. 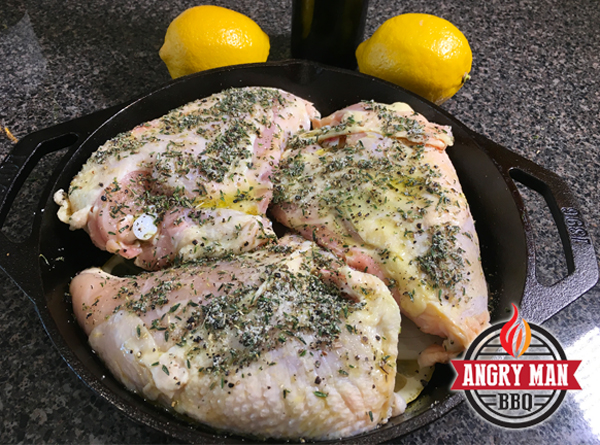 A skillet of chicken ready to cook! Below the chicken is a layer of sliced onion and lemon.

The recipe calls for Fennel seeds, Thyme and Kosher salt. Well, I substituted dried Rosemary that we had on hand for the seeds.   I ground the three together in my little coffee grinder.   Ina calls for mixing the spices with the olive oil but I poured on a little olive oil and then rather liberally sprinkled the spices. It would have been difficult to get too much spice on these humongous breasts!

I oiled the cast iron pan before layering the sliced lemon and onions as well as chopped garlic.   The bone side of the breasts were oiled & spiced then the skin side as Ina suggest in the recipe.   Rather than an oven I used the large BGE with platesetter (conveggtor for newbies) that was stabilized at 450 °. The cast iron skillet went right onto the standard cooking grate.   Since the pieces of chicken were so large I gave a little extra time for cooking. At about 40 minutes in I let the temp on the BGE creep up a bit to help crisp the skin some – this was at the time to add the white wine.  (I used an unoaked Chardonnay from Toad Hollow.)  When I pulled them from the cooker they were at about 175° internal but they were still totally moist and tender. 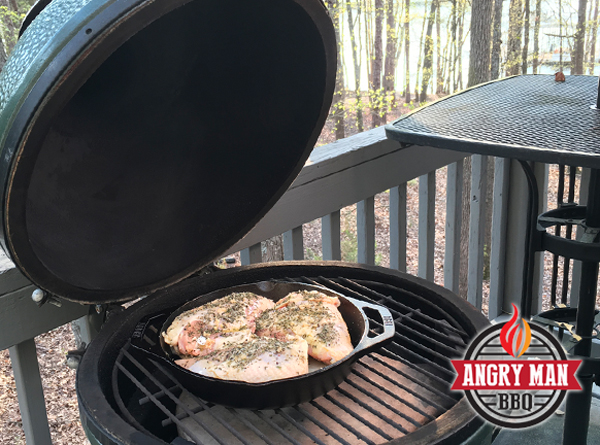 The chicken goes on the BGE set up for indirect heat and stabilized at 450 degrees.

When the pan came off the BGE I gave the chicken a lemon juice spritz as suggested and covered with foil for a 10 minute rest. The Pleasant Lady had prepared some spring squash in a stir-fry as a side and we enjoyed a superb skillet dinner. 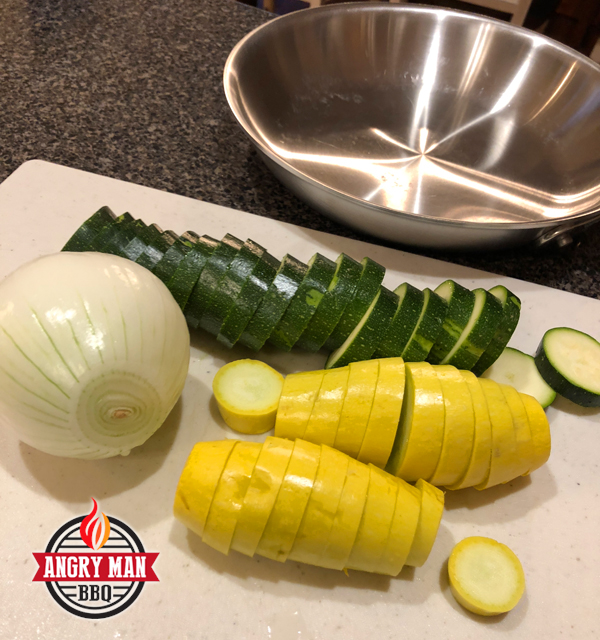 The Pleasant Lady’s squash stir-fry was a great accompaniment for the chicken. A quick easy meal, Not everything on the BGE has to take all day or make a huge mess – really.

Give it a try – it’s a rather simple cook and ought not to frustrate too much beyond the shopping for chicken.   Look for more cast iron skillet meals in future postings!

Here’s the link to this recipe at The Barefoot Contessa:

2 Responses to "Skillet Roasted Lemon Chicken On The BGE"