This is my adaptation of a recipe from Chef Linkie Marais (she makes it as Bacon & Cheese Bread). I like to take a recipe as a suggestion. I’m always looking for ways to personalize the cook along with ways to lighten some of the fat, calories and sugar. Here’s how I took this great recipe and made a lighter loaf that was a great compliment to a meal I was planning. Now don’t get me wrong – I love bacon & cheddar but that was a little more than I wanted for this loaf. We had friends coming for steak (terderloin filets) that I was preparing in the Sous Vide and I wanted a light compliment to the meat, broccoli & brown rice we were serving. Likewise, I wanted something that was unique, beautiful and impressive coming off the BGE. 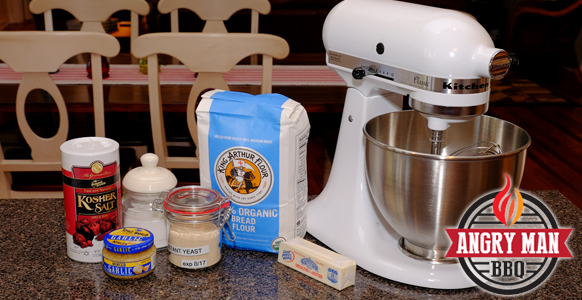 As always, I like to gather all the ingredients that I’m going to need. It makes a nice picture but it also saves headaches by eliminating the surprise when you are missing a key ingredient.   Linkie’s recipe calls for All-Purpose Flour but I like the softness of bread flour so that’s what I used. 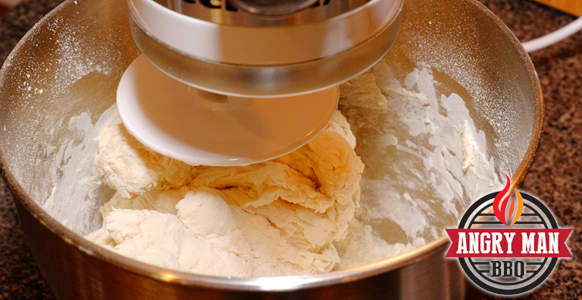 Gotta love the Kitchen Aid mixer and the dough hook – bread making is so much easier with this great tool. We toss the flour, sugar, salt and yeast into the bowl and give them a good mixing before adding in the water and mixing it all together. Once it has come together and is well kneaded give it a light coating of olive oil, cover the bowl and let it rest & rise to double – about 45 minutes.   This is a great time to get the BGE or your oven set for a 350 degree bake.   If you are using the BGE use a conveggtor with the feet up for an indirect cook. I toss my grill grate on the top of the feet and that’s where I’ll put my pizza stone for baking the bread. Do not preheat the stone – hold it out and use it for a baking tray. 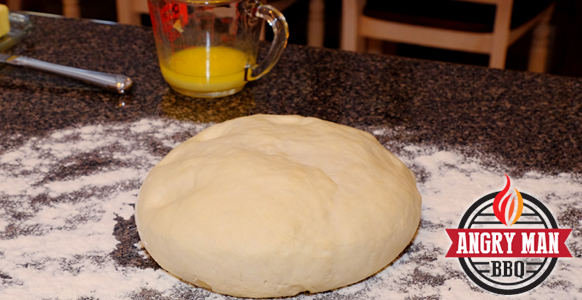 After the doubling I have a great dough ball to turn out on a floured work surface. 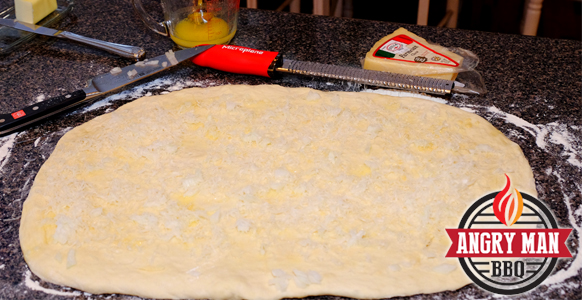 Punch the dough down and begin to spread it out into a rectangle (approx. 14×20). It’s good to lift the dough regularly to be certain it doesn’t stick and to spread some of the flour on the work surface. Once the dough is spread it is time to add the desired “goodies” to bake inside the loaf. I coated with melted butter and added minced garlic and fresh grated Parmesan cheese. You can toss whatever you like inside the bread – this is a great place for creativity. Leave the top ½ inch of dough clear from additions to allow a good seal when rolled closed. 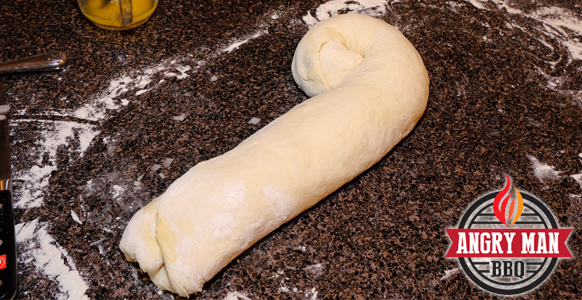 Roll along the long edge (think cinnamon or jelly roll) ending along the edge you left somewhat clean. Seal the roll as possible. 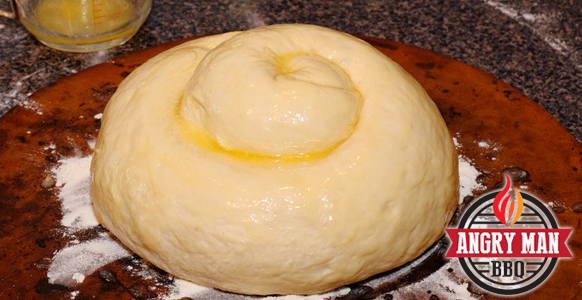 Begin to roll the loaf up around itself. Seems that the natural way this works causes the end to shrink down as you work the twist & roll. I placed mind on my cold pizza stone that had been dusted with flour. My stone is pretty well seasoned and I had no problem with sticking. Brush the outside with melted butter for a really pretty crust. 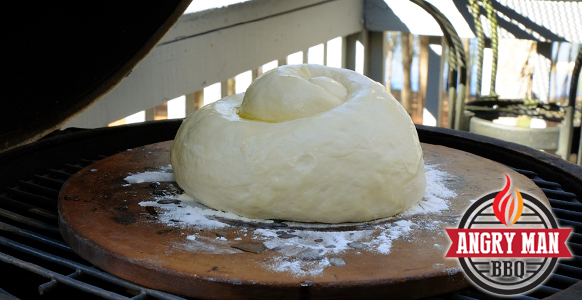 Place the loaf & stone in the BGE that is stable at 350 degrees or an oven at the same temperature.   There’s a real temptation to peak but fight it off and let her bake for an hour. 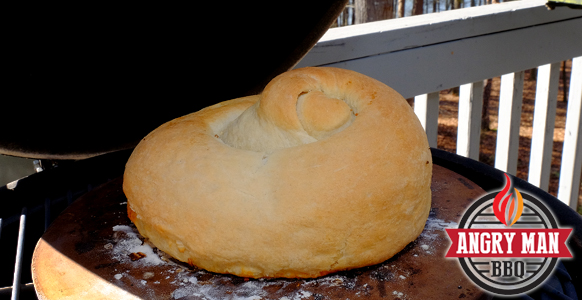 When you do check it give the center curl a knock with the knuckles and listen for a hollow sound below a crisp crust – that’s done! Mine sounded great!   I wish my guests had been there when I opened the BGE with this pretty loaf inside! I scooped it up on my pizza peal to take it inside. 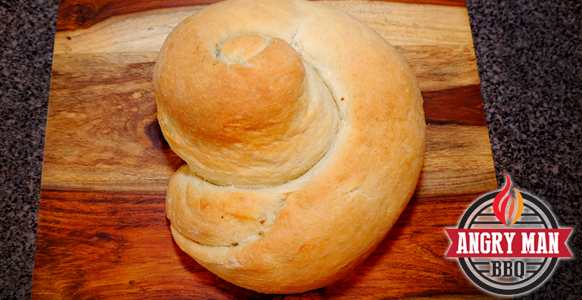 Here’s my finished loaf. Give it a short cool – if you can – before cutting with a good serrated bread knife. Oh my gosh – it was fabulous!

I do hope that you will try baking in your BGE or other cooker.   Wood smokers are really just ovens so use them for more than meat!   Enjoy the baking and you’ll have a fabulous compliment for any meal. And you won’t even have to get angry!

Thanks to Linkie for such a great inspiration!