Chicken Wings for the the Super Bowl

The National Chicken Council estimated that over 1.3 Billion chicken wings would be consumed on Super Bowl Sunday. I decided it was important that I do my part to assure that number was accurate! 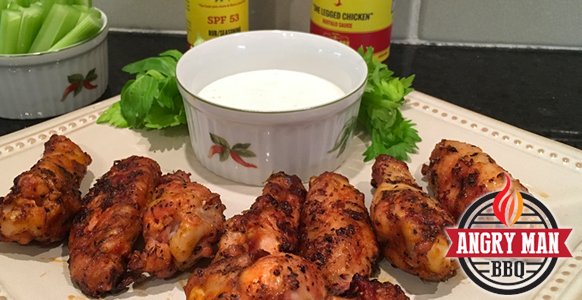 Once I had my wings I decided that I’d do a “cooking with friends” kind of approach for these fine flappers. The friends weren’t actually present – just their products as a part of the cook. I used the Turbo Stream stainless steel plates to create the indirect heat in the large BGE that are marketed by my friend Charles Roberts and we spiced the wings with my bud Ryan Lane’s SPF 53 Rub & Seasoning as well as his One Legged Chicken Buffalo Sauce. So those guys were here in spirit – or product rather – while I cooked. 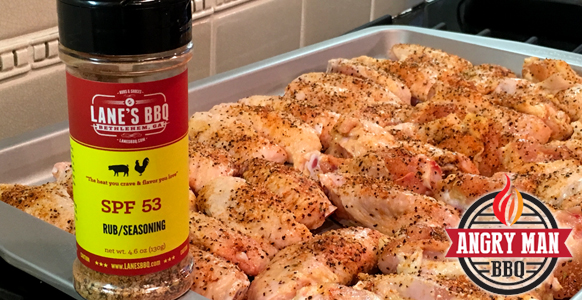 My bud Ryan Lane creates some great rubs – I chose his SPF 53 for these wings.

Here’s what I did to make some might fine wings.   First I cut the wings into drums and flats and dried them on some paper towel. Then they all went onto a bowl for quick rubdown (well, actually a swirl-down) with some fine olive oil – just enough to give them a light coating. I then spread them on a pan to give the a light dusting with the SPF 53 on both sides.   We like our wings to have spice but not to be hot so I’m not one to over-do the rub. The wings sat out while I prepared the BGE. 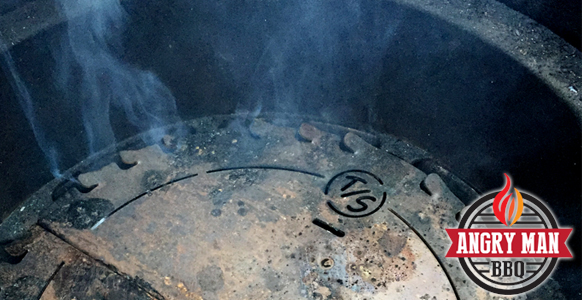 The TurboStream stainless steel indirect cooking system creates a really even heat without adjusting the level of the cooking great in the BGE.

I set up the BGE for indirect using the Turbo Stream stainless steel plates.   These fit into an insert just above the firebox and provide an even indirect heat. Mine are a little dirty from earlier cooks – but that’s OK.   Once the fire was going I eased the plates into rack and dialed in for about 300° dome temp. This time I added no additional woods for smoke – though that’s always good. 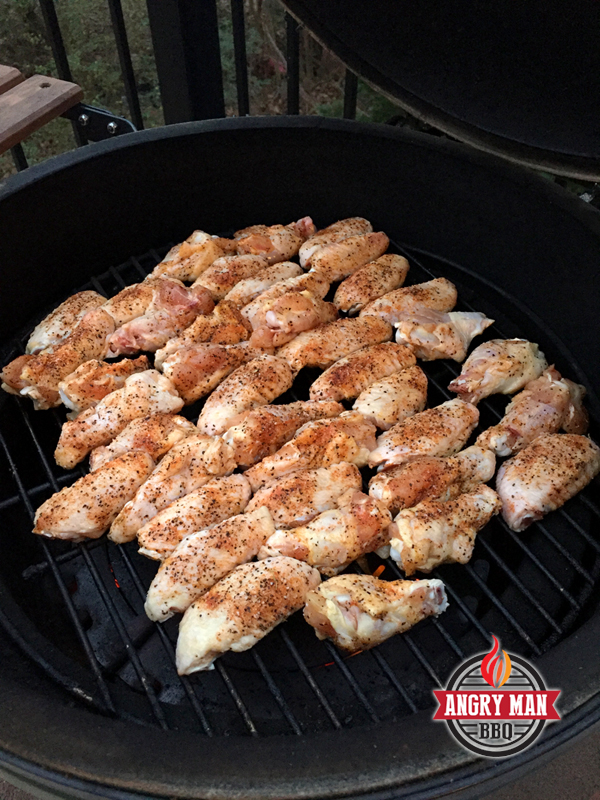 After the temp was stable and the BGE was hot I spread the wings on the cooking grate. 40 pieces fit nicely on the one rack so there was no need for using a multi-tier cooking rig.   I closed it down and gave them just over 20 minutes before turning them to cook some more. After about 10 minutes I checked the temp on the larger drums with the instant read thermometer– I was looking for 190+. The needed a few more minutes to hit the 195 to 200 range for all the larger pieces. That’s a little over but they were plenty moist and that way I know everyone is properly cooked.

While they were making that last few minute run up to temp I gathered a bowl and the Lane’s One Legged Chicken Sauce near the cooker. Once they were at temp I pulled about half my batch and lightly stirred them in some of the sauce. They were returned to the cooker for about 5 minutes to let the sauce set. I closed down a bit to begin dropping the temp while they finished off.

We gather them up and gave them a few minutes rest under foil before serving ourselves a fabulous Super Bowl meal. The wings were much better than the outcome of the game – well, from our perspective. That outcome – makes me angry! 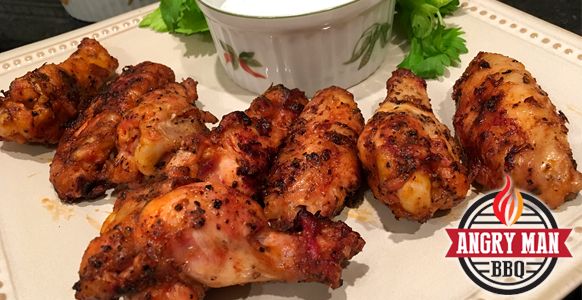 These were given just a swirl for a light coating of Lane’s One Legged Chicken Buffalo Sauce before spending a few more minutes in the cooker to finish off.

Some of the best spices, rubs & sauces you will find in a store:   www.lanesbbq.com

Oh, did you see that pic on the internet that shows it really wasn’t a touchdown that ended the overtime……that will get your boxers in a bunch!!!