Brisket – it’s become the holy grail of BBQ and the smoking world over the past few years. It’s one of those meats that either you are spot-on or way-off when it comes to perfection in cooking. Having grown up in South Georgia where BBQ is really only pork I did not even taste smoked brisket until I was in my 40s and that was during a trip to Texas. Even still I refer to brisket as smoked meat not BBQ. 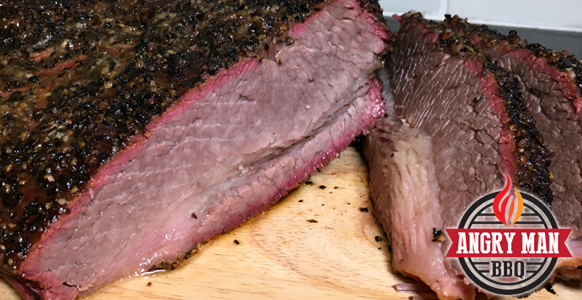 I know folks in Texas think it’s BBQ but I still have to call it smoked beef. My spices reach back to Momma’s Sunday roast for spicing inspiration and it’s good to go!

But seriously, it’s a great meat that can really shine in a good pit master’s toolbox when it’s done right.   I have to credit Matt Pittman over at Meat Church in Texas for really pulling out my interest in cooking brisket.   Matt came over and taught a competition class at BGE and his brisket was fabulous. I figured that if Matt could do it – well – I could too!!!   So I’ve been taking one on a spin through the cooker occasionally to see how it goes. I’m happy with the results now. 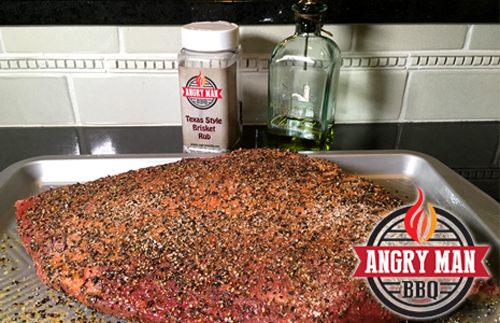 It’s time refill the EVOO bottle and the spice bottle after giving this small brisket a oil rubdown and liberal shake of spices. Sorry, Angry Man BBQ Rubs are not available in stores…..does that make you Angry???

First, let’s talk spices. Matt is from Texas and out there the spice for brisket is black pepper and salt – that’s it.   I’ve been trying that with decent results, but I keep thinking there needs to be a little more depth.   I’ve added some additional spice to the basic and think I’ve got a winner. No – I’m not going to tell you!   Part of this blog is to encourage you to experiment and push yourself. If you absolutely must have it handed to you then I recommend checking www.lanesbbq.com and Ryan Lane’s Brisket Rub will get you some great results. I like it on steak & burgers even! Remember that before it was famous, a brisket was just beef and you probably want some spices that compliment beef.   What did your momma use on the Sunday roast? Go and do likewise.   Maybe one day we will market Angry Man BBQ Rubs – but until that day comes you’ll just have to be angry with me an make your own! 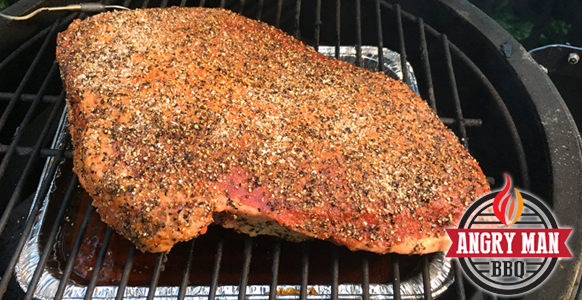 8 lb brisket on the BGE set with platesetter and water pan. Cooked at dome temp of 275.

This was a small flat that I ran through the BGE – about 8 pounds and it came from a local butcher called Costco.   I needed some other supplies and this just happened to jump into the cart at the same time. Friday morning after The Pleasant Lady had left for work I fired up the Large BGE and smoked up this little pup. This was to be a test of the latest version of my Brisket Rub. As always, after trimming away a good bit of the fat coating, I gave it a good massage with fine quality EVOO prior liberally applying the rub to all surfaces.   I popped this one into the BGE that was stabilized at 275° and it had no additional wood for smoke – just BGE lump. The BGE was set indirect with a platesetter (conveggtor for newbies) and a water pan between the grate and the platesetter. There was bottle of Guinness Stout in the fridge and I poured that into the drip pan with some water to help provide moisture as the cook started. I closed the lid and left it alone until the internal temp came up to 170 and then I wrapped in foil. I then let it go to 210 and the Thermo-pen probed – as everyone says – just like butter. 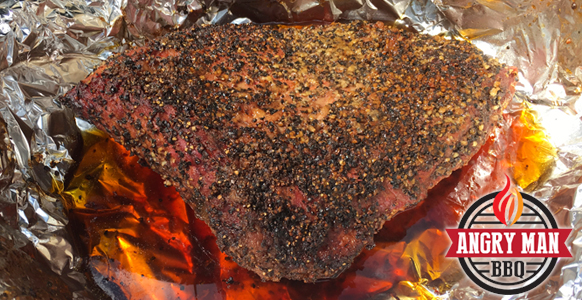 Oh man – nothing here to make you angry – except that it’s not sliced and ready to serve!

With the brisket wrapped I transferred it to a small cooler/ice chest and stuffed the open space with old towels. It rested there for a little over 3 hours before I carved it. It was still at about 170 when we pulled it out to carve.

Brisket is judged at the slice – moist & tender but not falling apart!

Now, I know many who think brisket needs to be black, very black, to look done. But I loved the look of this one over any solid black blob of meat.   When I pulled it from the foil juices and set it on the board it “jiggled” a great little done brisket dance and I danced too!!!   Holy Moly – this pup was good. We had a guest that evening and the brisket was a hit.   It then was sliced into small hunks and sauced for sandwiches for lunch today. Hey – this isn’t BBQ – but it’s a great kissing cousin to Q that I’ll smack on any day of the week.

Try something different!   Pick a meat you haven’t cooked much (if at all) and do the homework to be able to have a successful cook. There’s a world of information out there on smoking any meat you can find so do the reading. DO NOT POST ON FACEBOOK that you have a brisket that you are going to cook in an hour and you need to know what to do!!! That really makes me angry……   You’ll learn more and be a better cook if you research, pick your own plan and go!   Make your own rub, make your own sauce (if needed) and make the entire cooking experience your own. Then you will be a Jedi – I mean pit master!!!