A Little Brisket For Practice 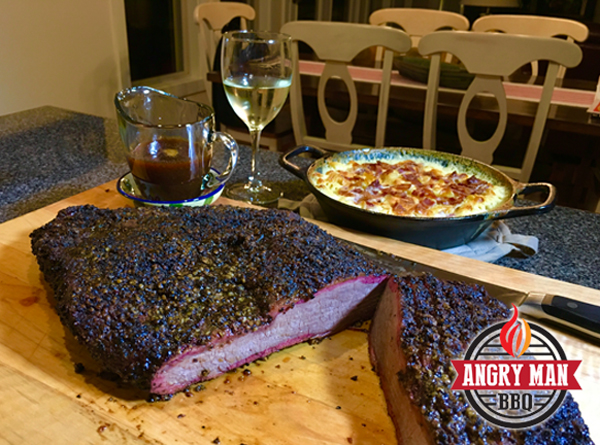 A great dinner after a frustrating day of hanging ceiling fans (well trying). A long, slow smoke on the pellet cooker while working around the house makes for a delightful evening meal.

We’ve been doing some updating and renovating at the Angry Man Test Kitchen at beautiful Lake Hartwell. Recently I bought a small brisket flat to cook while I was trying to change out some ceiling fans. Luck for you this story is about the brisket and not fans! There may have been an angry man on top of the ladder trying to change out a fan – but it was a great day at the smoker. 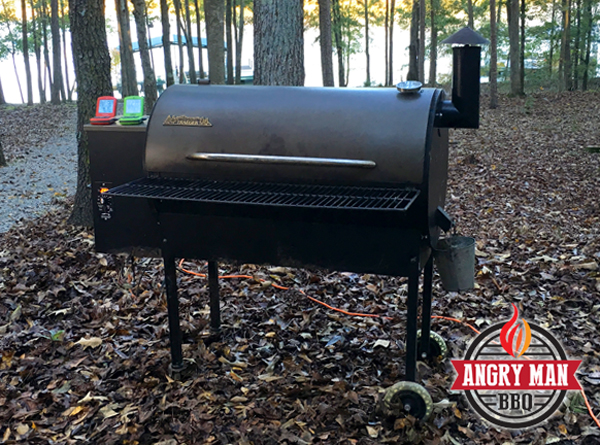 The Traeger Smoker is ready for action with a great view of the lake! Green ChefAlarm is for cooker temp and the Red is always meat temp. I love ThermoPro products!

This was just a small flat – choice grade – that I had picked up at the grocery.  Since I had other projects for the day it was a wonderful time for my Traeger Pellet cooker to be the cooker of choice.   It’s all about choosing the best tool for the job and for a long slow cook that needs minimal attention it’s the pellet feed.  I know that there are those folks out there in Q-On-The-Interweb land that will argue for using a particular brand because it cooks the best whatever. Heck, that’s like saying a Porsche wins races – without a great driver that’s just a somewhat organized pile of metal. Same with a grill – without a good cook it’s just a mass taking up space. 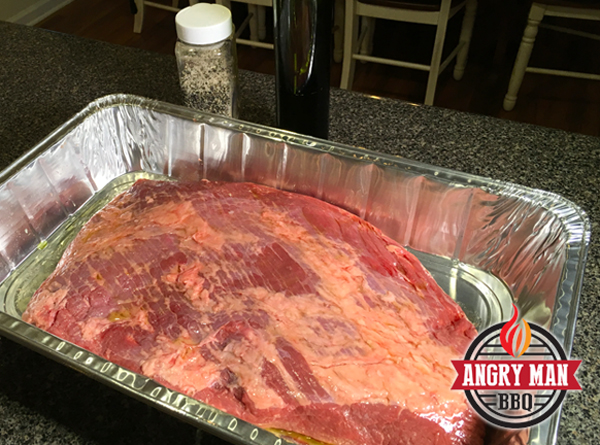 This little flat has been trimmed and had a soothing rub-down with fine olive oil. The S&P shaker bottle is ready for action.

Here’s a photo to serve as a reminder that I use an olive oil rub-down on my meats before adding rubs & spices. Personally, I don’t eat that silly yellow mustard on a sandwich because it’s just gross slime. So, why would I slather that trash all over a great piece of meat as so many insist is proper?   Personal bias here on using olive oil as a binder – but I’m right!

As the holy grail of Texas BBQ, brisket is usually seasoned with an even mixture of salt & pepper.   I keep a shaker of 50/50 kosher sale and coarse ground pepper in the kitchen for general use and that’s what went on this little guy along with just a dash of smoked paprika.   I think there’s a great flavor addition for beef with the smoked paprika. And, as that paprika begins to melt into the olive oil it sets up some great color at the get-go. 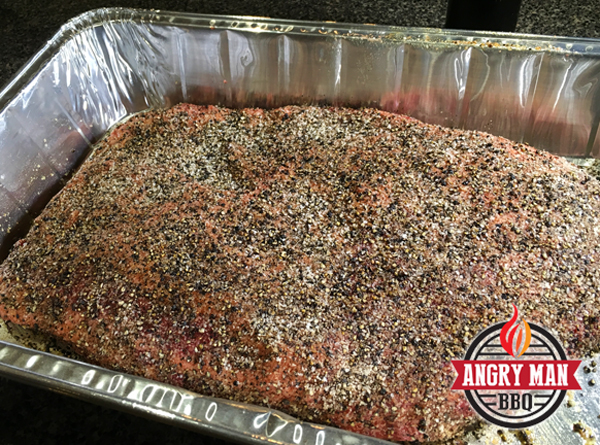 I ran the cooker at 275° with hickory pellets.   I love the ThermoWorks ChefAlarm digital thermometers. No, they are not wireless, wifi, and they don’t make pretty picture grafts of your cook but they do an exceptional job at telling an exact temperature and then raising a ruckus (aka loud alarm) when you reach a preset temp.   I also really like that they are each capable of reading only one probe! If you have never had one segment of a multi-component system go belly-up on you then you may not totally appreciate my perspective. But if you ever had a TV-radio-turntable combination in one beautiful cabinet you know what happened when the turntable quit spinning – you know it wasn’t pretty and one dead component pretty much ended the function of the entire unit. But I digress…… I’m set here as I am for most of my cooks with one thermometer for the cooker and one for the meat.   Yes, I do set a back-up for cooker temp despite the Traeger having it’s own digital control – it’s just a good practice. 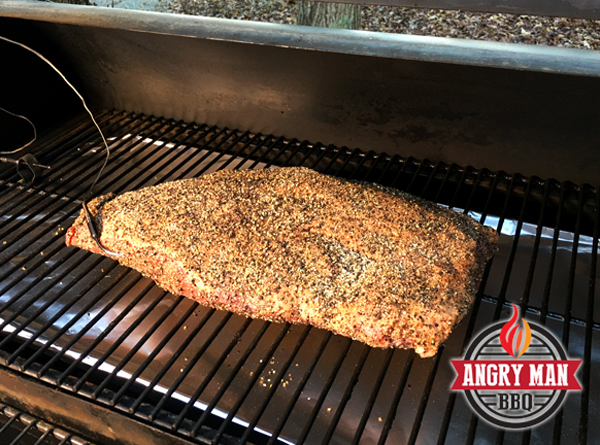 She’s on the cooker and ready for an all day roll in the smoke. Temp probe is in the thickest part of the flat.

My first stop was at an internal temp of 165 to wrap the meat. I use white uncoated butcher paper for wrapping brisket and ribs – it works just like red, pink and green.   No pics here of that process since I had that pesky ceiling fan project going on at the same time.   I use the same roll, tuck and roll some more technique I watched Virgil Taylor use when I was a young pup and my mom would send me up to the Taylor’s Lake Park Grocery for 2 pounds of ground chuck.   Aaron Franklin has is demonstrated in a video and I’ll do that some day when I get 1) more time and 2) get video figured out. Once wrapped it went back in the cooker and ran to an internal of 210 at the thick part where I had the probe.   I poked it with my ThermoPen and it was indeed: as soft as butter!   That marked about 10 ½ hours of cooking when I transferred it over to a cooler to rest a couple of hours. 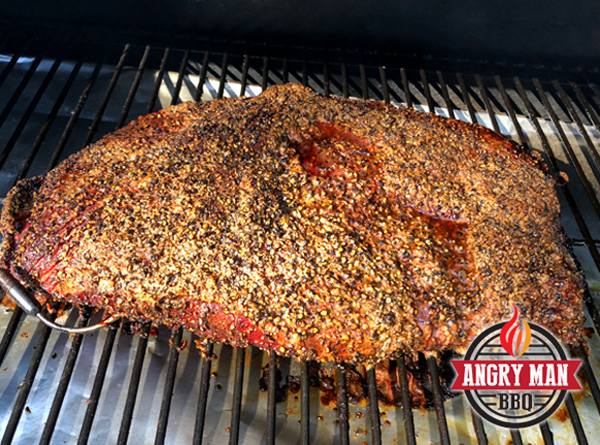 You will find earlier posts about my easy MacChee that we smoked in the BGE to serve with this brisket.   It’s an easy just stir together the ingredients and bake in cash iron.

A small cast iron pan of my easy MacChee! 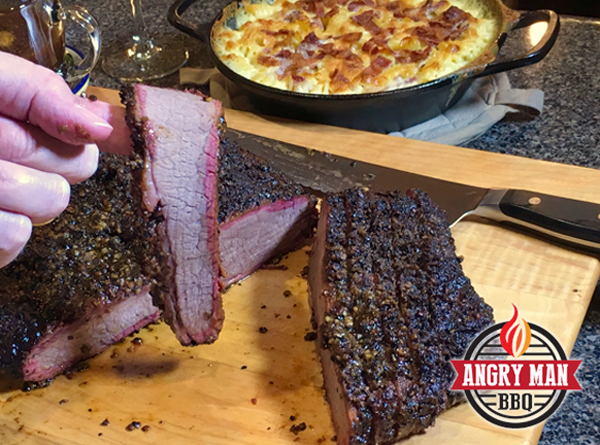 Tender, juicy and flavorful. Score one for The Angry Man and the Traeger Pellet Smoker.

This one sliced up perfect and the taste was even better than the look. The Pleasant Lady and I had a marvelous meal together – despite the aggravation that the fan project would require another trip to the depot.

Thanks for reading.   This was just a fun one for practice but the results were more than fine.   After we ate well we froze a bit hunk with the idea of some brisket chili ahead.   Look for a new post soon!

4 Responses to "A Little Brisket For Practice"